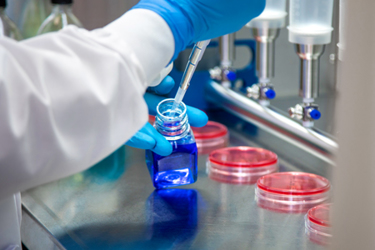 Microbial challenge studies are becoming increasingly common as drug products (DP) are being manufactured with different types of active pharmaceutical ingredients (API) than fifteen years ago. Peptides, proteins, monoclonal antibodies, oligonucleotides, and biosimilars are more common; manufacturing no longer places an emphasis on small molecules. These new APIs possess different handling and storage challenges due to their physical and chemical sensitivities. Also, regulatory bodies have begun to focus more keenly on how drug developers prove that products with a post-manufacturing handling step, prior to patient administration, have been fully vetted to ensure patient safety.

The FDA currently assumes a four-hour in-use window from the beginning of DP administration to the conclusion of administration, based on an understanding that patient administration does not always immediately follow drug product manipulation (e.g., reconstituting a freeze-dried powder with its liquid diluent, as with a lyophilized product). However, the agency also has proposed case study data and guidelines relevant to extending that in-use window — more specifically, relevant to a DP manufacturer’s ability to conduct a study to legitimize its instructions to patients/physicians about the duration of time a DP is safe to administer following post-manufacturing handling.

In September 2020, the CASSS[i] Midwest Regional Virtual Forum: Clinical‐in‐use Stability Studies produced a guidance document[ii] outlining what the FDA currently seeks from microbial challenge studies. The document discusses the rationale behind in-use study designs, as well as examples where adhering to its principles could have saved organizations from fines, penalties, or 483s had they exercised more diligence upstream.

When is a Microbial Challenge Study Necessary?

A microbial challenge study does not directly apply to products like a single-dose, prefilled syringe. The line is drawn, for the most part, when any alteration or manipulation is required after the DP has been filled into its original container, but before it is administered to a patient. Per the guidance document discussed above, “many biological product solutions, after reconstitution or dilution, are growth promoting.” A microbial challenge study should be initiated when:

Consider the following examples, all drawn from clients Singota recently has served: First, a client submitted its initial IND paperwork to the FDA for a DP manufactured by Singota. A fraction of the dose was drawn from the original container — a vial — and injected into an IV bag, which was infused into patients up to several hours later. In its response, the agency requested a microbial challenge study.

Despite the product being years away from commercialization, the FDA requested data to demonstrate evidence that transferring the DP into an IV bag did not introduce any yet-to-be-investigated risks. The client had an abundance of sterility and stability data about the product inside the vial, but they lacked microbiological data indicating what occurred after that product left the vial: Could microbe growth begin after it was injected into the IV bag? If a physician removed the bag from refrigeration and had to step away, would the bag be safe to administer to a patient after two or three hours at room temperature? Microbial challenge studies are necessary to establish some of these tolerances.

A second client produced a lyophilized product through a different manufacturer. The product was packaged in a kit containing a freeze-dried sample in one vial and reconstitution liquid/diluent (e.g., saline or water for injection [WFI]) in another vial, as well as a needle and a syringe. Similar to the first scenario, the client had to establish parameters for use if the patient reconstituted the DP at home and then had to step away prior to administration. They had to know what safety labeling to include on the packaging directing the user to discard the product after X hours following reconstitution if it was not used (i.e., understand if and when microbial growth would begin after the liquid was used to reconstitute the lyophilized material in the vial or drawn into the syringe). Thus, Singota designed a microbial challenge study to simulate patient in-use conditions and was able to obtain sufficient data to justify safe in-use conditions.

A third client produced a multi-dose DP vial. They needed to demonstrate that, after the first needle puncture, their vial would not be susceptible to promotion of microbial growth. Additionally, they wanted to quantify how many times the vial could be punctured before it was no longer safe, as well as how long after the initial dose was drawn the vial could be used before it must be discarded.

How is a Microbial Challenge Study Executed?

First, initial engagement with a study partner differs from sponsor to sponsor. Continuing with the case examples above, the first client (with the IV bag) is a current client. Upon receiving the FDA’s feedback, they approached Singota because we were the DP manufacturer. Singota was not able to support manufacture for the client with the lyophilized product, but they had worked with us previously on a liquid formulation and with lyophilization R&D studies; their positive experience led them to reach out to Singota when they needed a microbial challenge study. The client with the multi-dose therapy had not previously worked with Singota before. They reached out indicating they were encountering difficulty in identifying a partner not only with experience and expertise in microbial challenge studies, but also a partner that could generate viable information for the FDA from such a study. As the guidance is not even two years old, not many CDMOs openly offer this type of program.

When seeking a microbial challenge study partner, the DP manufacturer generally is the first entity to approach, due to its existing knowledge of the product. Three questions are key to determining that partner’s capability:

If the sponsor is not satisfied with the answers, their best option is to pursue another partner with manufacturing experience in the product’s expected administration avenue. For example, does the partner only conduct lyophilized studies or IV bag studies, or do they have experience in numerous administration avenues? Have they conducted studies with your particular means of administration? If so, what follow-up communications have those studies generated from the FDA? A lack of experience in your administration avenue should not automatically disqualify a potential partner, but it warrants a careful conversation about their overall strategy, relevant to how they would handle your particular DP and how it might be different from studies they previously have conducted.

Once an organization has secured a study partner, the FDA guidance provides a framework of requirements for how the study should be shaped, leaving it to the study provider’s interpretation and experience to turn guidance into practice. It also is important to note that a significant quantity of materials (e.g., microorganisms, media plates, drug product, etc.) are consumed, and that significant time may be necessary to conduct the study, as those materials are being tested across numerous time points.

After selection of the microorganisms, the next variables left by the FDA guidance to the study designers is the number of samples and testing time points. A client may want duplicate sample analysis. Another client may want triplicate sample analysis, consuming 50% more DP during the study. A different client might want IV bag testing across eight time points or to have multiple temperature storage conditions. Two testing medias might be able to be used from a single DP vial because of the concentration requirements. Thus, each study is unique in its application, sample handling, and testing parameters. The study partner’s job is to accommodate each client’s variables within their stated goals and circumstances (e.g., the amount of material they can dedicate for testing and the number of time points to justify their in-use window).

The latter variable is important because the guidance document does not indicate how many time points are necessary. It just says studies should space time points out in a way that provides confidence, when a failure occurs, that the previous time point represents a trustworthy cutoff. Failure occurs, per the guidance, when testers observe “an increase in a microbial population of more than 0.5 log10 (i.e., more than a three-fold increase in CFU/mL),” or when “an upward trend in microbial counts is indicative of growth promoting conditions.” The FDA guidance also instructs study designers to “assess the start of exponential growth.” If failure occurs at 12 hours, was the previous time point 6 hours, or was it at 10 hours? If too great a gap exists between failure and the previous time point, a supplemental study may be necessary to provide data closer to the failure.

Ultimately, the study data is collected and reported, allowing the study provider to show trends indicating where bacteria may infiltrate a process. The sponsor then can confidently approach the FDA and report the microbial challenge study results to demonstrate that the DP should be safe when handled in the manner and within the timeframes outlined in the study’s conclusion.

The FDA has built a safety factor of two into the data analysis, meaning if a microbial population causes failure at 12 hours, the agency expects a sponsor to report the drug is safe for 6 hours under the conditions used for the study. Accordingly, if a sponsor wishes to claim its DP, as used in the study, is safe for 24 hours, it really needs to demonstrate safety for 48 hours. At the other end of the spectrum, if the product fails at 8 hours, the FDA’s four-hour in-use window might be called into question, forcing the sponsor to reevaluate its entire administration strategy.

In a very short time span, microbial challenge studies have become a common request for DP manufacturers. This increase in study demand is due, in part, to the FDA taking an increased interest in the topic. Similarly, remember that several years ago, it was much less common to include data on forced photostability degradation in early regulatory submissions to demonstrate safety. In 1996, the FDA released a guideline[iii] describing photostability. Now, attempting a submission absent some photostability degradation data or justification would be an oddity. Microbial challenge studies could follow a similar arc in coming years, emphasized earlier and earlier in DP development by regulators.

To learn more, visit us at https://singota.com/ and on LinkedIn.

Ken Chomistek is the Director of Quality Control and Development at Singota Solutions. Ken received his BS and MS degrees in Chemical Engineering from the University of Michigan. He has over 15 years of experience in the pharmaceutical and biotech industries, including roles in product development, cGMP analytical testing, laboratory management, new product launches, R&D, equipment validation, and ICH stability programs.

Singota Solutions is a contract development and manufacturing organization (CDMO) focused on helping clients in the pharmaceutical, animal health, and biotechnology industries move their products through the drug development pipeline faster by being agile, accountable, and transparent.